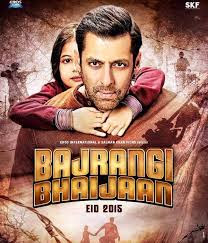 The fact and the reason behind the movie release on Eid were known. The two opposite citizen of the nation can burn a flame of love is seen every moment in the movie. The relationship of a common devotee of Bajrangi and a dumb cute little girl fills the heart and bring tears. The two main reason of grasping the history to the box office is of Salman Bhai's film and the other is the story of the  movie. But the story of the movie is the only reason which highlights more than Salman Khan.


A wonderful message is displayed on the big screen, there it is hardly any point of any criticism and the movie rates is registered out of. Social movies are always been my favorite, and it is a cream on a biscuit if their's a Bhai is trying to deliver the message to the audience. A wonderful combination of an Indian and Pakistani will be seen in the movie. When the Munni/ Shahida jump out of the floor on the victory of Pakistan cricket match and kiss the Pakistani flag in front of Indians, whereas the Pawan Kumar Chaturvedi is pure vegetarian and a pure a devotee of Hanuman still he allows Munni/ Shahida to have non-veg food and step in the Masjid. The message highlighted in the movie is Lord Vishnu says, the heart should be pure. And the dialogue of Maulana Sab (Om Puri)" Thoda Kashmir Hamare Pass Bhi Hai" is the whistle dialogue of the film, whereas the dosti is better than dushmani is also highlighted in the movie.

Kabir Khan (Director) poured out the efforts to the movie and the audience rates fruitful results to it. Location were neatly and worth related to the script. Masjid/ Dargha were shooted amazing. The Audience would love to sight Salman Khan's different and refreshing character in the movie which they all are waiting to see. Harshali Malhotra really wins everyone heart in the movie whereas it was a difficult task to only be on the expression without uttering a word. Kareen Kapoor has not much screened in the movie, but it is fine. Nawazzudin Siddique always rocked the screen, as the comedian and serious shots in the movie. Om Puri as an experienced actor also shot well in the movie. Pritam ( Music Director) also pour a real touch to the movie. There were the chances of screening first half more interesting and on the other side there was no need of exploring the last 30 minutes of the movie. Ending reel of the movie sparks a Main Hoon Naa effect of Bharat Milap.

Hoping for the great movies ahead to Salman Khan Films and Kabir Khan. Harshali Malhotra for her bright future in the big screen. Till then.